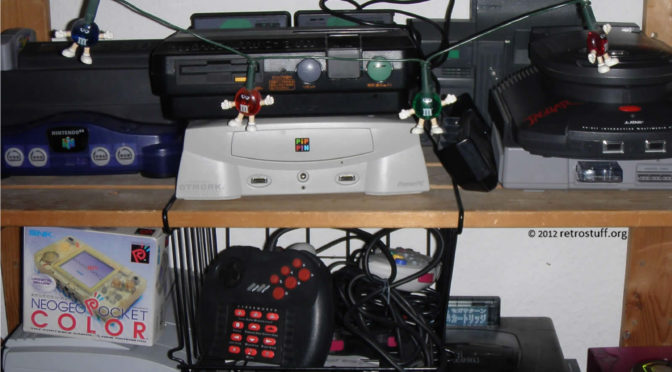 10 years ago, I started this blog retrostuff.org to record what I was tinkering with in my spare time. It was initially meant to be some sort of diary and also include everything that I bought related to retro- and game consoles (see category New Arrival), but that turned out to be way too much work, so I focused on technical articles. Over the years, I had so many projects that not everything could be properly documented and put in an article. The backlog is huge and I’m always trying to review and improve old articles as well.

For the 10th anniversary, I took a trip down memory lane and selected one or more articles that were important to me. Be it because they are about a favourite device or an important discovery or milestone in research.

It didn’t stop with that and I took it apart several more times to modify it for RGB output. Only this year, I found the sources of the photos that I took back then, so I will probably review the old article and also prepare new ones.

For 2013, it was a close call between my first documented modification for Philips CD-i players and the disassembly of the Bandai Datach Joint ROM System.

This was only the first article about this obscure attachment and since then more has followed (category Datach) and will continue to follow until I have a full set of games one day.

In 2014, I planned to write a series about uncommon Sega Saturn peripherals, but for unknown reasons it already stopped after the Twin Stick and the Mission Stick (part 2).
More exiting for me was the arrival of my first NUON DVD player:

In 2015, I did another CD-i player modification, but I also spent some time replacing and troubleshooting the display of my Atari Lynx II:

A lot was going on in 2016 and it’s very hard to decide. The most obscure device to fall into my hands, however, was the Sega Pri Fun printer for Sega Pico and Saturn:

In 2017, I figured out the hardware constellation that triggered the cake puzzle bug in the CD-i version of The 7th Guest. In the very same year, I also started to tinker with my first arcade hardware at home:

In 2018, more Neo Geo hardware entered my home. My most important project was the first article about repairing a broken portable CD-i player, the Philips CDI350:

In the following years, I wrote parts 2 and 3.

2019 was a very productive year and picking articles is a tough choice. Since I covered a lot of Bandai Pippin hardware that year, I went for the article about building ADB adapters with help of a Sega Game Gear:

In 2020, I wrote a lot about Philips CD-i. Among them, my longest article so far: A complete overview of all modifications for Philips CD-i players:

Information is still being added today and it grew so large that the NVRAM section had to be outsourced to a separate article.

More articles about Philips CD-i in 2021, including the first successful hacks of system ROMs:

In 2022, the Bandai Playdia Q.I.S stole the show after having been neglected for so many years: