Last year I was tempted to import an expensive and rare official ASCII / Sammy Keyboard Controller for the GameCube, but I’ve found a way cheaper alternative for now: the ebest e-Keyboard Converter for PC/PS2/GC/XBOX. It costs approximately 1-5 EUR and connects a standard PS/2 keyboard to a PC and PlayStation 2 (via USB), GameCube and Xbox (via proprietary connectors).
END_OF_DOCUMENT_TOKEN_TO_BE_REPLACED

For connecting the GameCube to a PSO server I chose the game Phantasy Star Online Episode I & II (US), two flavors were available, v1.01 and die Plus version, both have bugfixes or new features and are superior to the PAL version. In addition most NTSC games can be played in 480p progressive scan mode (hold B when booting the game). There is a High Definition Game Database that lists all video/audio/online features of most games of the last console generation.

Unfortunately US games hate it when PAL save states are on the memory card, you can’t start playing and get stuck in a loop in the settings menu. PSO has at least four save states that are protected and can neither be copied nor moved to another memory card. To play online with my Hunter character of the last decade, I decided to try it with the PAL PSO game. Sadly my character wasn’t there anymore, just a dummy that was used to connect to the disc server.
END_OF_DOCUMENT_TOKEN_TO_BE_REPLACED

Yesterday I erased my Dreamcast’s flash memory, hoping to get past the serial number prompt.

Today I dug my Dreamcast keyboard out of the basement to get things done faster. It’s an ugly grey PC style PAL-DE keyboard (HKT-7632) that reminds me every time I see it that a new, preferably JP HKT-4000, has to be bought soon… 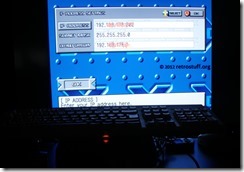 END_OF_DOCUMENT_TOKEN_TO_BE_REPLACED

Back in the days I never played PSO online with my Dreamcast because the Broadband Adapter was impossible to obtain and the included modem was no use when connected via DSL. On the GameCube I played PSO offline a lot, but never obtained a Hunter’s License. Besides playing with it, PSO for the GameCube had an important bug that allowed loading and playing the first batch of pirated games via Ethernet, long before the first modchips surfaced, but that’s another Story…
END_OF_DOCUMENT_TOKEN_TO_BE_REPLACED