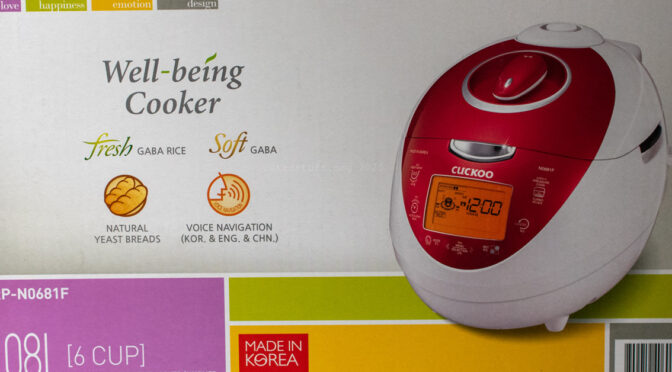 The Cuckoo CRP-N0681F rice cooker doesn’t run Doom (yet; see below), but it can talk, sing and chuff like a steam locomotive. It also prepares all kinds of rice. One day, the display went blank. The next time I plugged it back in, it greeted me in Korean and wanted me to set the clock. It seemed that the internal battery had died and the user manual agreed with that:

About Lithium battery
– This product contains lithium battery for improving blackout
compensation and time. Lithium battery lasts 3 years.
– When current time is not displayed on the screen, it means the battery is exhausted. It should be replaced.

Unfortunately, that’s all what the manual had to say about this topic. A quick search on the internet didn’t reveal any clues about the battery replacement, so I opened it up to have a look inside.

Caution: The rice cooker has a lot of glass wool for thermal insulation inside. Make sure to protect yourself and clean up every time after you’ve opened it up!

Remove the six marked screws and lift the bottom cover. The seventh screw in the small cover of the power cable can stay where it is.

After carefully lifting the bottom cover, I found the battery right away on the power board.

Before I was able to lift the cover further, I had to unplug the small connector that lies on top of the power board assembly. The wires go to the speaker.

Next, I unplugged the other connectors as well and unscrewed the power board to get it as far away as possible from the area with the glass wool.

The battery is a 1/2 AA 3,6 V lithium cell with solder tabs. It’s the same battery type (14250) that old Macintosh computers and the Pippin Atmark use.

To make future replacements easier, I wanted to solder a battery holder into the same place. Unfortunately, the footprint of the holder was too large. The limited space and the screw in the middle of the PCB didn’t allow an easy relocation. In the end, I soldered the battery holder with two short pieces of wire to the PCB.

Then, I pushed it back into its previous place without covering the screw and glued it to the adjacent plastic cover and the power board.

Mind that this is the bottom of the rice cooker; when everything is assembled again, it will be upside down. But it is a tight fit and looks stable enough to me.

After I put everything back together, the display was still blank. But after I plugged it into the socket and set the clock and English voice again, it kept the settings even after the external power was lost.

But can it run Doom?

Because of the glass wool, I avoided to explore every component of the rice cooker. The mainboard, however, is very easy to access. It sits right below the power board and the whole assembly can be pulled out easily after removing two screws.

On the back of the mainboard, there are three chips:

I’m not going to try to run Doom on this. However, I’m pretty sure that the processing power exceeds the recently explored pregnancy tests that were modified to run Doom. Even if the display is too simple to display a game like that, with the fancy audio chip and speaker you can listen to the music and sound effects for sure.