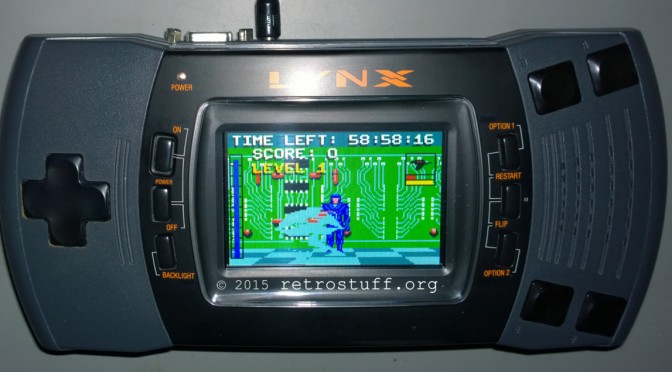 Replacing the aged Lynx screen with a new LCD screen is simple. All you need is an Atari Lynx II and the LCD screen kit by McWill (and optionally, a 5 V regulator).

First, remove the two rubber feet to reveal four screws. A fifth screw is hidden in the battery compartment.

Following the instructions by McWill, you will eventually be advised to check the 5 V connection. If you don’t get any voltage then insert a game, as the Lynx won’t turn on without one. If there is still no voltage (or if it exceeds 5,45 V) then the original circuit has failed already and needs to be replaced with a modern regulator.

I first went for the instructions with a SMD regulator LD1117S50TR as described here (German).

Well, that was a bad idea. The regulator gets very hot within the first minute and then the game stutters and eventually shuts off.
It only works reliably when the internal screen is turned off and the video is sent through VGA out.

A much better option is a RECOM regulator, as described here.
McWill provided me with a RECOM R-78E5.0-0.5 regulator and after it was installed, the Lynx has been running for hours and didn’t fail once.

Then, I was looking for a way to connect the Lynx to the Framemeister. It turned out that the RGB-in port accepts a 31 kHz signal too. To make use of the port, H-sync and V-sync need to be combined to composite sync. Instructions for a sync combiner can be found here and the pinout for RGB-in here.