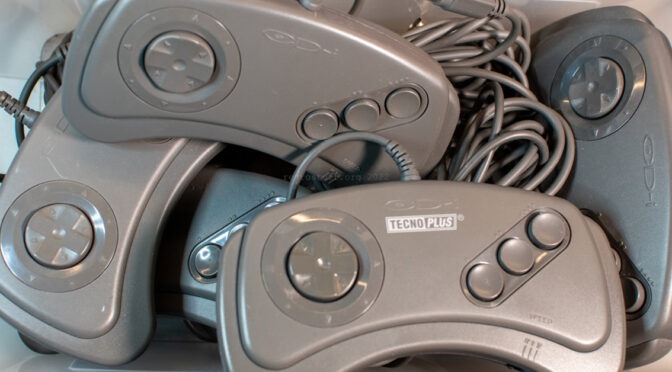 Last year, I asked myself whether or not all Philips 22ER9021 CD-i Gamepads are the same and answered with probably. Since then, I have had a look at some more gamepads of different production dates, including an unbranded 22ER9021 and a TecnoPlus TP520 CD-i Control Pad. Let’s revisit and elaborate on what has been discovered last year:

But I found something else: In 1995, the shape of the pins on the back of the D-pad was changed from a two-barred cross to a circle:

Apart from that, there are no other obvious differences.
Let’s have a closer look at some of the variants:

The TecnoPlus TP520 CD-i Control Pad (or Tecno Plus TP 520 – the spacing isn’t always consistent) is another mystery of the world of Philips CD-i accessories:

Who was the original designer and manufacturer of the Philips 22ER9021 CD-i Gamepad and why was TecnoPlus Ltd. using the very same design and parts for CD-i, PC and console gamepads?

Some sites (incl. ICDIA) state that it was built by Logitech. This is the case for first gamepad (22ER9017 CD-i Touchpad), which has the name Logitech printed on the PCB and the microcontroller, but there are no indications or any other similarities inside the second gamepad (22ER9021).

This mystery won’t be cleared up today. But here are some detailed pictures that show that, apart from the print on the front and the information on the label, the TP520 is the same as the 22ER9021:

The TP520 CD-i Control Pad was usually accompanied by a port splitter. I can’t tell if this was always the case, but on all pictures of the boxes that I found online was always a round sticker with the text “Limited Offer – 2 Player Splitter Cable Included”. On one of the boxes, I’ve found also a price tag with the text “CDI Port Splitter TP522”, which gives us the model number. This is the only reference so far though.

With its oval shape, the TecnoPlus port splitter can easily be distinguished from Philips’ 22ER9208 I/O Port splitter. And there is also a functional difference: Ports 1 and 2 are swapped. Apart from that, the wiring is identical.
Keep this in mind when experimenting with accessories that need a certain port to work properly (e.g. 22ER9042 KeyControl and modem) to save you some frustration.
For more information on the wiring of the original port splitter, check the Adapters and cables section of this article.