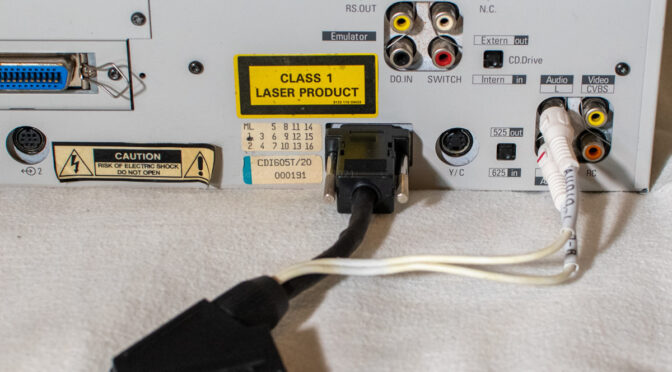 The second generation professional and authoring CD-i players of the Philips CDI60x series feature a DE-9 RGB port. To improve the video quality of my CDI605T/20 and also to prepare for future experiments, I built a prototype RGB SCART adapter. The needed pinout is documented in the 605 and 605T user manuals on ICDIA.

After the first tests were successful, I made this schematic for an adapter with a SCART socket (output) for both RGB video and audio:

SCART pin 16 is the Blanking signal and needed for compatibility with most TVs. The resistor doesn’t have to be exactly 180 Ω (100 – 220 Ω are perfectly fine).

This is the final adapter, made from leftover parts I had lying around from other projects. All signal cores are separately shielded.

What about other CD-i players?

I assume that the RGB port of the 601 and 602 professional players (you can see the port in the brochures on ICDIA) and also of the 604 have the same pinout. If you attempt to build an adapter or a cable for these players, I recommend measuring the output signals first.

First generation consumer players are lacking this port, but it can probably be wired up easily – the footprint of the connector is on the CD panel PCB. Just look up the schematics in the 220/00 service manual (CD PANEL PCB/CIRCUIT DIAGRAM CD PART 2) and implement some of the parts marked with “CDI6XX ONLY”.

The DE-15 RGB port of the CDI181 is not compatible, but you can use the information found in the installation and operation manual. Again, measure the output signals first and pay special attention to CSync / TTL CSync to avoid damaging your display device.

The following samples were recorded with an Avermedia Game Capture HD II. I connected S-Video and Composite via RetroTINK2X (classic v3.1, Composite in VIDEO mode) and RGB SCART via OSSC. Apart from Line Doubling, no additional filters/smoothing were enabled.
I also took screenshots with CD-i Emulator and the cdi605a3.rom from my player to have an additional reference.

(I’ve adjusted the aspect ratios manually to somehow mimic how it looks on my TV. This adjustment is not accurate at all and only loosely based on the pixel aspect ratio.)

All in all, I’m very satisfied with the result. The Composite and S-Video outputs of this player were already quite good, but RGB SCART is definitely an improvement.

If you think that these pictures are a bit too dark, then you’re right. They look brighter on a real TV. All samples were recorded with limited colour range (RGB 16 – 235). This also helps when comparing the following colour bars from the CD-i player Service Shell on a computer screen. (Since web browsers render colours in images differently, you might want to download the images and view them with a photo editor.)

As already mentioned in my last article, I will have to dig deeper into this topic, when there is time. Especially, to make sure that all my samples are taken with the same settings for better comparison.