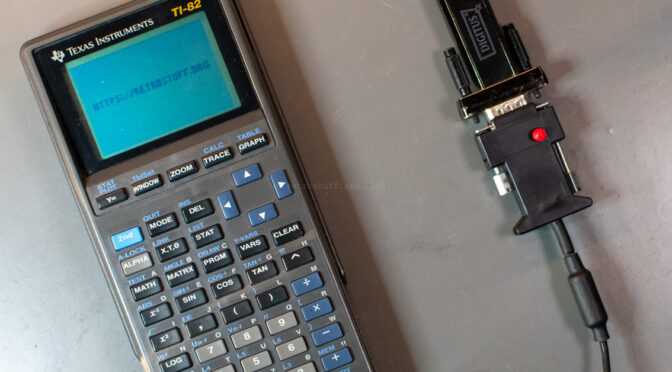 In the early to mid-90s, the Texas Instruments Ti-82 Graphics Calculator (or Graphing Calculator) was introduced and became a requirement in some high schools. I never had the official serial link cable to connect mine to a PC, but it came with a calculator-to-calculator link cable. That cable was very popular during math lessons for trading pictures, programs and games. We had several games back then, but I only remember one game, a Breakout clone programmed in TI-BASIC that was painfully slow.

I still have this calculator, but it was sitting in a drawer for more than 20 years. In this article, I will bring it back to life and connect it to a modern Windows 10 PC to install a Breakout clone or something better on it.

In school, I prettified it with nametags and stickers all over. Even if they are fond memorabilia, it’s time for them to leave. Also, I’ll have to look inside to check if the backup battery has leaked in all those years.

On the contacts of the batteries was a greasy substance and dirt that could be removed easily. I don’t know what it was, but probably not caused by leaking batteries. After assembly, there were some random missing lines on the display that changed position upon pressing buttons or the case. They eventually went away on their own during my serial link tests.

There are many ways to connect the calculator to a PC or Mac. I didn’t bother with the official TI-GRAPH LINK cables and software, but went for a home-made solution instead. On ticalc.org, I found a simple schematic and built a provisional version on a breadboard. This link cable is also called $4 serial link and is compatible with the black link cable by TI.

Link software can be found here. There are only two programs that are compatible with 32-bit Windows: W32Tran8x (2001) and TiLP II (2016). I chose W32Tran8x for the following tests because TiLP gave me a lot more trouble with my configuration (see below).

At first, I tried the cable on an old IBM ThinkPad 600E with Windows 98. To access the serial port, I had to install the DriverLINX Port I/O driver (Port95NT.exe). Unfortunately, no matter what settings I tried, I couldn’t initiate data transfer between the laptop and the calculator. After some troubleshooting, it turned out that the plug on one end of the link cable had a loose ground contact that couldn’t be fixed. Therefore, I removed the defective plug and connected the wires directly to components on the breadboard. Now, everything worked fine:

After the successful test, I stuffed all components into a DE-9 case with a female connector. If I had used smaller resistors, then there would probably have been enough space for the ferrite bead as well. But it still turned out pretty good-looking.

There were several obstacles that I had to overcome until connection and data transfer worked on my Windows 10 PC:

To overcome this final obstacle, I installed 64-bit Windows 10 20H2 in Oracle VirtualBox. Then, I connected the USB serial adapter on the host (COM4) with the virtual serial port of the guest (COM1 on 0x3F8).

W32Tran8x was now able to connect to calculator, but the transfer speed from the calculator to the PC was very slow. For example, getting a screenshot took 2 minutes on the standard transfer speed setting (9600 bps) and between 45 and 70 seconds on 128.000 bps.

Back to Windows 9x

I took a step back and installed Windows Me in VirtualBox. While it is supported, it lacks drivers and Guest Additions with the seamless integration and file transfer. It is almost unusable in that state. To transfer drivers and programs, I created a virtual ISO (VISO) with the needed files on my host computer.

After installing a supported display driver (VBEMP 9x), the system became much faster and better looking. I also installed W32Tran8x v4.1 and the DriverLINX Port I/O driver (Port95NT.exe). In the settings of COM1 in the Device Manager, Windows Me offers 921.600 bps as fastest transfer speed. This setting made a difference; transferring a screenshot took only 10 seconds.

This is still slower than on my old laptop with Windows 98 SE and built-in serial port. It is explained here that the actual transfer speed depends not only on the state of the calculator but also on the link cable, software and computer. You will probably get much better results on a Windows 10 computer with a built-in serial port (and without VirtualBox), but that’s up to you to try that out.

There is a huge file archive on ticalc.org; the Breakout clones for the TI-82 can be found in /82/basic/games/arcade/pong. I tried most of them until I eventually found a game called Breakout (brkout2.zip / BRKOUT2.82G). This looks pretty much like the game that I played back in the days. In comparison, a screenshot via W32Tran8x and how it looks on the calculator:

As mentioned before, I didn’t have much luck with this program. With VirtualBox and my USB to serial adapter, I couldn’t establish a single stable connection in BlackLink mode. In the TiLP forums I’ve found some hints but not a definite solution. According to this thread, the TI linking protocol needs direct access to the wires, and only very few USB to serial adapters support that. Also, adapters with a Prolific PL2303 controller were mentioned, so I tried the LogiLink AU0002E adapter with PL2303TA chipset. No, it didn’t work.

On an older PC with built-in serial ports and Windows 7, I finally managed to connect TiLP with my calculator. The transfer speed was as fast as what I experienced with my old Windows 98 SE laptop before, but it also became instable at times and crashed. All in all, I like this program more – when it works. The screen capture function is quite responsive and has a setting to simulate the greyish background of the calculator display.