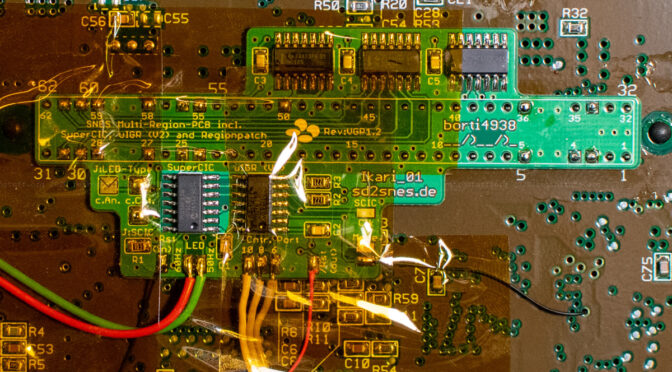 Today, I wanted to try out the pre-release sgb06 firmware. It is a fork of the original SD2SNES (aka FXPAK) firmware and implements support for the Nintendo Super Game Boy 2. After I had set everything up, I was wondering why the SuperCIC was disabled. I remembered then that I had bought a SD2SNES Pro last year, but never used it because of this:

Right now, it seems to have a bug when used in combination with a SuperCIC. As soon as the SuperCIC is enabled in the configuration, there is no picture and sync is lost (also, weird readings on the OSSC display). Upon switching the frequency, the LED of the console turns red and is stuck in that status. According to this thread, a firmware update is needed for one of the SuperCIC chips. I’m looking forward to see if this can be resolved through a SD2SNES firmware update. Otherwise, I’ll have to desolder and flash one of the SuperCIC chips.

Since then, two firmware updates have been released for SD2SNES, but they did not fix the issue for my SD2SNES Pro. I checked last year’s thread and the SuperCIC page to see if I had missed another update, but there was nothing. Nevertheless, I downloaded the SuperCIC source+hexfiles and noticed that the internal date of the files was changed to 29.03.2019 – a couple of days/weeks after the bug was mentioned in the forum.

I decided to get rid of the issue once and for all by updating the SuperCIC (lock). The chip is a PIC16F630-I/SL in a SOIC-14 package; it takes only a couple of seconds to remove it with hot air. Still, I protected the surrounding area with Kapton tape to prevent other components from getting loose and flying away.

Next, I placed the chip in an adapter and read the content with the PICkit 2 Programmer software. It matches the content of an old supercic-lock.hex file (dated 23.09.2010) that I found on my hard disk. Then, I programmed the new file (dated 29.03.2019) to the chip.

After this was done, I cleaned up the area and soldered the chip back to where it belongs.

I put everything back together and enabled the SuperCIC in the settings. After a reset, there is no weird behaviour anymore; the SD2SNES Pro SuperCIC compatibility is finally established.

Back to the initial topic that made me do all this: Here are some pictures of the startup screens of the Super Game Boy 2 and some random sgb-enabled games. I took them with an Avermedia Game Capture HD II connected to OSSC. (Don’t mind the aspect ratio, it did not correct it this time.)