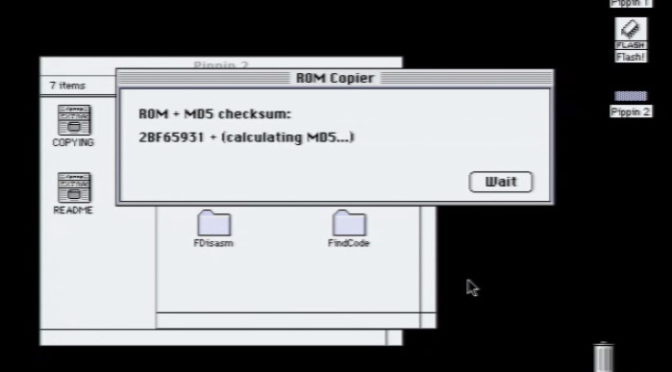 Earlier this month, I wrote about my Pippin Atmark PA-82001-S Monitoring Unit. Initially, I didn’t plan to do any modifications to this special Pippin model. But then Keith Kaisershot told me that it is possible to feed a long SCSI cable over the metal lips of the case without doing any permanent modification. He also asked me to verify the checksum of the ROM. In this article, I will add external SCSI to my Pippin and also dump the ROM.

I can confirm that the cable really fits. There is close to no space between the metal lip and the top cover of the cage, but it doesn’t cut the cable.

With this new connection, I tried a variety of SCSI devices, to see what works and what doesn’t. The goal was data exchange between my PC (or Mac) and the Pippin. As startup disc I chose Tuscon (Macintosh on Pippin) . My DVD-RAM/PD drive was recognised right away, but as a CD-ROM drive only. Too bad, as this was my preferred solution to transport data due to past experiences with my Philips CDI605T and FM TOWNS II.

Next, I tried an Acard AEC-7726Q adapter with an IDE HDD, which works well in my Power Macintosh. No luck here either, the Pippin won’t start up when this adapter is connected (both on internal or external power). I will have to look into this again a later time.

Last, I connected an Apple SCSI HDD that I had lying around in my Power Macintosh as a spare / backup drive. It was immediately recognised and mounted, but contained only warning text files and not the data that I expected. This was due to the file system used (HFS Extended). The Pippin OS (System 7.5.2) can only deal with HFS Standard.

Then, I found another spare SCSI HDD from a Power Macintosh. After some tinkering with the jumpers (important: terminate the disc and do not use SCSI ID 3), it was recognised as well and could successfully be formatted with the Pippin (running the Tuscon disc).

Meanwhile, a new PRAM battery and a SCSI2SD adapter had arrived. I decided to end the tests at this point and focus on putting everything back together. I replaced the battery with the Pippin still switched on, and it did not lose the contents of the PRAM/Flash.

To make sure that nothing will happen to the SCSI cable in the near future, I didn’t tighten the hind screws of the metal cage and the plastic cover all the way.

I chose the V5.1 hardware with both the 50-pin connector and the DB25 socket. That way I can use it with the Pippin and its new external SCSI cable and also with my Power Macintosh, without having to take either one apart again. It also runs well on the power that either SCSI bus provides.

With the configuration utility, I enabled the termination and created two 1 GB HDDs on the SD card. Then, with my Power Macintosh, I copied the system folder of the Tuscon disc onto the first HDD and the contents of the Pippin Kickstarter disc (and some more tools) onto the second HDD. My Pippin booted from it right away (it takes only about 30 seconds). There is no need for additional SCSI devices, as some people believed (I think it started here).

This is quite easy with the MacRelix ROM Copier that I took from the Pippin Kickstarter disc. Just run it and it dumps the ROM.