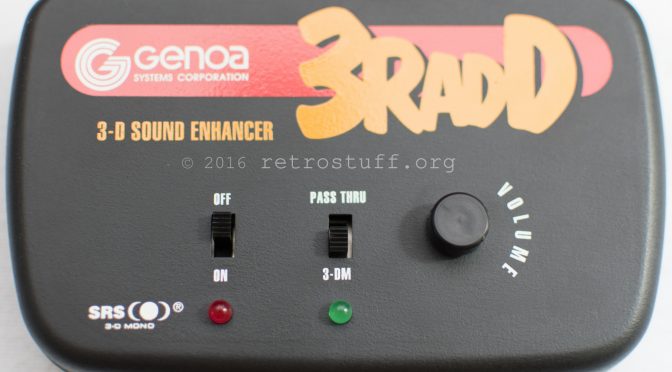 An unusual SegaSaturn accessory: The 3RADD – A sound enhancer with SRS psychoacoustic technology. Read a review on this japanese blog. Here is a scan of the manual.

The effect with audio sources is quite nice, it boosts the sound and positions it around your head. The technology is used in all kinds of devices and software, e.g. the Windows Media Player (SRS WOW).

The imprint on the PCB reveals that this is actually the Game Gizmo 3D (or 3-D) by Calypso Micro Products.

This is what I found with the new information:

L.A. Times, Dec. 25, 1993 – Start-Up Hopes Its Alternative to Stereo Becomes Sound of the Future : Audio: The technology, purchased by SRS Labs from Hughes Aircraft in June, enhances sound for two-speaker stereos but eliminates the sweet spot. by Dean Takahashi

Game Players Vol. 7, No. 2, Feb. 1994 – A small article on page 8:
The SRS Imaging System
Originally developed by Hughes Audio, the SRS (Sound Retrieval System) has been licensed to Calypso Micro Products for its Game Gizmo 3-D. This device uses existing SRS technology to create a “surround sound” experience without the pricey hardware. Using hidden audio clues to trick your brain into thinking sound is somewhere it’s actually not. The SRS can create a three-dimensional image from any monoaural, stereo, or encoded sound signal and uses just two speakers. Already used in high-end Video monitors by Sony and RCA, the SRS technology provides exceptional clarity and Sound seperation.

Here are some pictures of the device: