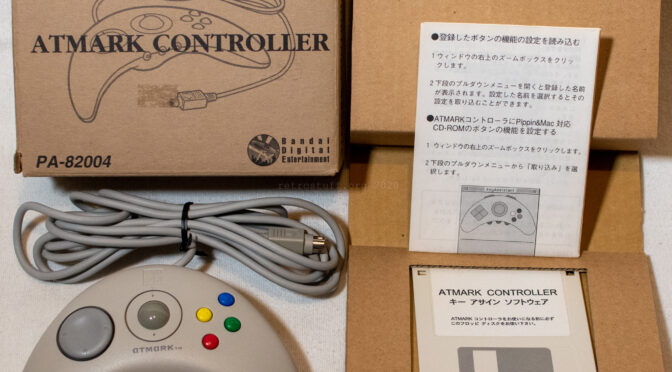 I’ve recently acquired the Bandai Pippin Atmark Controller for Macintosh (PA-82004) and took it apart today to see what’s inside. I didn’t expect a lot of surprises because this is the Apple Desktop Bus (ADB) version of the Pippin Atmark AppleJack Controller (P-ADB).

The small box contains the controller, a driver/software disk and a leaflet with instructions. You will find some more information about the software below.

I didn’t want to do the same mistake that I did when opening my AppleJack controller last year. Back then, I opened it from the back first and then slipped while trying to turn the ring that holds the ball clockwise.

This time, I removed the plastic ring by turning it counter-clockwise with a sturdy pair of tweezers. It came off without any problems or accidents.

The two halves came apart without any difficulty. Next, I unplugged the cable and unscrewed the unit with the encoder wheels. Then I took out everything that’s inside but the orange buttons on the back.

This is the whole PCB, unfolded. We can see that there is no difference to the AppleJack controller.

The only difference is the cable with the ADB plug.

For more information about the pin assignment and differences between ADB and P-ADB, read this article. The adapter that is featured in the article is needed if you want to use this controller with a Pippin Atmark console.

I expected to see the same driver/software that I’ve found on the Pippin SDK CD-ROM, but this one turned out to be different. Instead of Applejack Control 2.2.0, there is a KeyAssistant which looks nicer but is missing some features (test mode, save settings, probably more).

Some oddities:
The title of the program doesn’t always say KeyAssistant. Upon startup, it shows Shigeo Izutani very briefly and when you grab and move the window, it says Master Kikuchi.

Also, the about screen says Bandai Digital Entertainment while the AppleJack Control about screen points to Apple.

(I took some of the screenshots on my Pippin Atmark with Flash-It v3.0.2 and transferred them with a floppy disk. On my PC, I used MacDisk for Windows to copy the files and an old PhotoShop to convert them from PICT to PNG.)