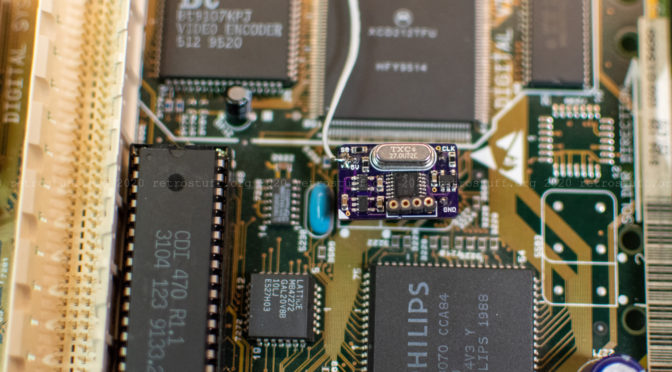 When we modify/switch a PAL CD-i player to 60 Hz without changing these crystals/oscillators as well, then we not only lose the colour, we also never reach 60 Hz (NTSC is actually 59,94 Hz, but we will round it up). It is always slightly below (e.g. 59,5 Hz on my CDI470). This affects other game consoles as well, by the way, and can be troublesome for some modern TVs and video processors.

I’ve been thinking about a dual crystal solution for quite a while now, but never got any further than not finding a 30,2098 MHz crystal oscillator anywhere. Then the DFO (dual frequency oscillator) project (German / English) caught my attention. It uses a TI CDCE913 programmable clock synthesizer to generate two frequencies. There is also another project, MFO (multiple frequency oscillator), that generates even four frequencies.

Unfortunately, you cannot buy these. VideoGamePerfection and Otaku’s Store had the DFO for a while, but not anymore. And even then, the boards came pre-programmed for either Sega Mega Drive or Sony PlayStation. Custom frequencies for the Philips CD-i, require a programmer, and these are also not sold anywhere. There is an alternative though, cdceprog for the Raspberry Pi.

When tired of waiting, I finally ordered the PCBs for DFO and programmer from OSH Park and the components from Mouser last year. Only the 1 µF SMD capacitors weren’t available there, so I had to buy them from a Chinese seller on eBay. Then, I baked one of each board in a reflow oven. This is how they look at the moment, with additional connectors for programming:

Before adding the switch and DFO to my CDI470/20, I reset it to the initial configuration (ROM and NVRAM). Then I measured system clock frequencies (PAL) on the points indicated in the service manual.

There are some more interesting points to check the video output frequencies:

After I had verified that everything is within range, I began with the modification.

This is basically the same procedure as for the CDI660 since both CD-i players have a Mono IV mainboard.

The STANDIN! signal on pin 58 tells the CPU if the CD-i player is from the PAL or NTSC region and changes the frequency of the video output to either 50 or 60 Hz. Two jumpers (10 kΩ resistors) 3203 and 3290 set the signal.

Next, I soldered a 10 kΩ resistor to the centre pin of an SPDT (single pole, double throw) switch. Then, I soldered the wire from (2) and a second wire (S0 / DFO) to the other end of the resistor. Finally, I soldered the two wires from (1) and (3) to the outer pins of the switch and secured everything with heat shrink tube.

The DFO comes in the size of a DIL-14 package, while the original crystal oscillator 5560 (CXO) is a DIL-8 package.

The Mono IV mainboard has enough a space for both package types. Carefully, I desoldered the CXO 5560 from the back. As usual, at least one of the pins was soldered from both sides. This required a powerful desoldering gun and a lot of patience.

Next, I fitted four pieces of a precision socket. With this socket, I was able to use oscillators of both package types and swap them for further tests. The two pins on the lower left can be omitted.

Finally, I fitted the DFO and attached the additional center wire from the 50/60 Hz switch to S0. This will switch between the two system clock frequencies. For NTSC S0=1 (high) and for PAL S0=0 (low).

To calculate and program the desired frequencies 30,0000 MHz (PAL) and 30,2098 MHz (NTSC) to the DFO, two programs and the programmer hardware are needed:

With TI ClockPro and the tutorial from the project page, I calculated my first pair of frequencies and saved the result as Intel .hex file.
With the CDCE9XX Programmer hardware and software (the current version is 1.1), I programmed the .hex file to the DFO.

The results were somewhat unexpected: In NTSC mode, I finally saw a nice, colourful image. The PAL mode, however, was now flickering and with wrong colours. I checked the frequencies thoroughly with my frequency counter and oscilloscope, and it turned out that they were about 1 kHz lower than expected (and programmed).
I removed the DFO again and put the original crystal oscillator back into the socket. After thorough tests of both oscillators in the CD-i player and in a testing board, I came to the conclusion that the CD-i player runs fine and that my DFO must be faulty.

I assembled another DFO and soldered every component by hand.

This time, the frequencies were about 1,1 kHz lower than programmed. I can only assume that this is caused by the cheap 1 µF capacitors; each DFO uses three of them. A quick check of the remaining capacitors showed that not a single one was within the specifications. It will take a while until I’ll order the next batch of components, so the faulty boards will have to do the trick for now. They are still useful for this experiment, as they output the (too low) frequencies steadily and reliable.

A big advantage of the DFO is that you can program it on the fly, while the CD-i player is switched on. Important: V_Target of the programmer needs to be switched off.

That way, I was able to raise the frequencies little by little until both targets were met. The video output became colourful in both PAL and NTSC mode.

Please try them out and let me know of your results. Until then, I’ll need to make some time to assemble more DFOs that hopefully work more accurately.

I recorderd these samples with an Avermedia Game Capture HD II, while doing tests with various video processors (RetroTINK2X + OSSC, Framemeister and DVDO iScan VP50 Pro). Unfortunately, the capture device refused to display/record anything from the device with the best looking output (iScan VP50 Pro).
I’ve adjusted the aspect ratios manually to somehow mimic how it looks on my TV. This adjustment is not accurate at all and only loosely based on the pixel aspect ratio.

The Framemeister doesn’t like 60 Hz with the original crystal oscillator and doesn’t display a picture at all. It also displays an annoying bright stripe on the left of all PAL images. But I took a lot of pictures with it, so here they are: