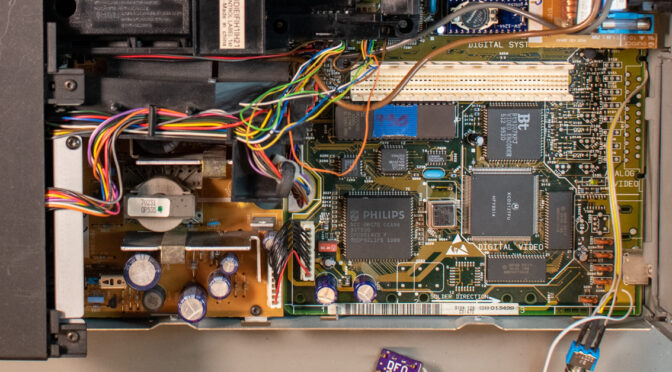 Replacing blown fuses in Philips CD-i players with Mono III and Mono IV mainboards – sounds too simple to write an article about. That’s why I’m going to dig a bit deeper into the topic. An important fuse sits on the mainboard and protects the -5 V rail. I tripped (over) it by accident and was confronted with these weird symptoms that are hard to diagnose:

Apart from that, the CD-i player seemed to be working:

Some time ago, while doing measurements on the extension connector of the CDI470 that I use for experiments, I slipped with a probe and shorted the +5 and -5 V rails.

Immediately, the video signal was lost and didn’t come back after a power cycle. At first, I thought that my experiments with NVRAM upgrade and DFO were the root cause and that shorting the pins just gave the final blow to the mainboard. But it turned out to be something else.

After several power cycles and letting is rest for a while, I noticed that the motors were spinning. Now, spinning motors are usually a sign of problems with the power supply, especially the -5 V rail. When I checked the power supply, I was surprised that there weren’t any fuses at all, like the power supplies of the large players use to have. Also, all voltages were fine. I checked again at the extension connector (more carefully this time) and found that -5 V wasn’t there anymore.

A quick look on the mainboard confirms that it is right next to the power supply connector (grid square F1). This applies to all Mono IV mainboards, by the way.

I ordered a couple of replacement parts and replaced the broken fuse. Here are some pictures that I took of the old and new fuses:

With the new fuse, everything went back to normal and my 470 works perfectly fine with all its modifications. The article could end here, but we’re not quite done yet.

On Mono III mainboards, the fuse has ID 3274 and sits farther away from the power connector in grid square F3.

Make sure to unplug the power lead before inspecting the power supply. Also, leave the power switch in “on” position for a while. I’ve marked the filter capacitors (2103) with a warning sign because they can zap you if you don’t discharge them!

If you need to measure something while it is switched on then make sure that it cannot move, keep away from the live area and don’t run it without load.

Conclusion and tips for testing

Whatever power issue or other unknown symptom your CD-i player shows, always check the supply voltages in several locations:

While the service manuals are usually very clear about where to check +5 V supply voltage of individual chips, they don’t tell you where to check -5 V. Check the schematics and you’ll find that the latter is used by servo op-amps and audio/video amplifier circuits. The easiest way to access it, however, is the extension connector. To avoid future accidents, I crimped a 3-pin JST-PH (2 mm) plug to an old PC fan cable. You can use an adapter like that to safely connect probes to the extension connector (pins A1 – B1 – C1).

There are even more supply voltages for large players that the service manuals are even less clear about or constantly mix up:
+24/25 V and/or +12/11 V. Depending on the player, you’ll usually find them on the connector for the display panel (or combo panel if the player doesn’t have a VFD). +12 V is needed for players with SCART connector to generate the Switch signal.