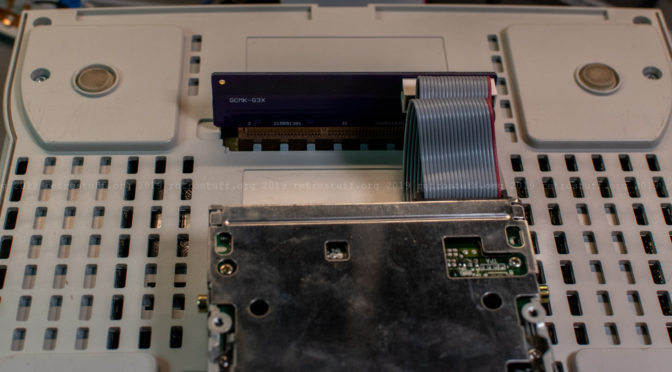 A floppy disk drive for to the Pippin Atmark is nothing new. In fact, an expansion dock called Pippin Atmark Floppy Unit was released back in the days. These units are incredibly rare and I was never able to get ahold of one of them. Apart from an Apple floppy disk drive with 20-pin ribbon cable, these units contained no additional hardware but a simple X-PCI adapter board. It didn’t take long until Japanese enthusiasts tried to replicate these adapters. When I recently rediscovered my Pippin Atmark PA-82001-S, I also looked around for additional hardware. I found this article about an adapter board that had been finally replicated two years ago. This board can still be ordered from OSH Park.

One additional part is needed: a 20-pin box header with 2,54 mm pitch. This is how the PCBs look with the box header. I also trimmed the PCBs a bit.

A Mitsubishi MF355F-592MA floppy disk drive attached to the adapter.

The adapter plugged into the X-PCI port.

The Pippin can’t stand on its feet anymore, obviously. I didn’t try to operate it upside down and sat it onto two small boxes instead.

The Pippin immediately detected the insertion of floppy disks, but always tried to format them regardless of whether they were empty or preformatted with a Mac. It was never able to finish the formatting. Upon closer inspection of the floppy disk drive (a used drive that I salvaged from an old broken Power Macintosh years ago), it turned out that the inside was covered with greasy dust. Unfortunately, not even cleaning could make it read floppy disks again.

Having no other spare part available, I took the working floppy disk drive from my Power Macintosh and connected it to my Pippin.
First, I tried to format a floppy disk from the previous attemts.

This time, it was finally successful and I ended up with a fresh HFS formatted flopy disk with 1,3 MB available space.

Next, I copied various files, backed up the flash memory and tried to access the copied files with my Power Macintosh – everything worked as expected.

Last, I tried to boot from a bootable Mac floppy disk. I used disks from several systems, but all I got was this message:

At least the Pippin was attempting to boot from them. I’ll continue to look for the correct system files that are required to successfully boot from a floppy disk.