Back in the days I never played PSO online with my Dreamcast because the Broadband Adapter was impossible to obtain and the included modem was no use when connected via DSL. On the GameCube I played PSO offline a lot, but never obtained a Hunter’s License. Besides playing with it, PSO for the GameCube had an important bug that allowed loading and playing the first batch of pirated games via Ethernet, long before the first modchips surfaced, but that’s another Story…

Now, let’s set up the Dreamcast with BBA to connect to the Internet and/or the private PSO server.

As easy the instructions on the site and in the forum seemed, as impossible it was to get them to work. First off, the Website menu in the PSOv2 game complained about a missing file and wouldn’t let me continue or enter the connection data. 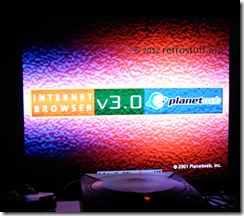 Then I tried to enter the data with the Planet Web v3.0 disc:

Static IP: an address beyond the DHCP range
Subnet mask: 255.255.255.0
Gateway: my router’s address
DNS1: the address mentioned in the forum
DNS2: again the address of the router

Finally every address was entered and saved – still no connection, neither with Planet Web nor with PSO, and even worse, still complaints about missing files and Planet Web told me that its disc was corrupt. 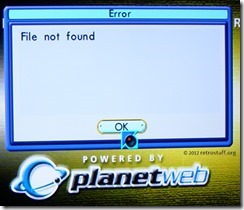 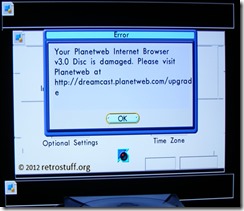 When looking for help online I was told the internal flash could be corrupt and needs to be flashed. Another suggestion was to use the alternate XDP browser. Since no XDP browser was at hand I remembered that I had some browser-based multi-game discs lying around. Most of them were Japanese and thus impossible to set up, but then I came across a disc called “TDC Final v2” with an English browser application.

The data above was entered quickly and then finally it happened: The first connection to the Internet, or at least to a private DNS server. 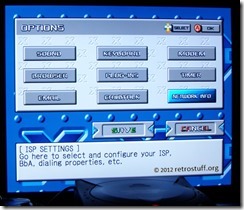 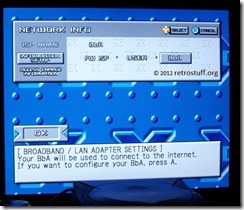 The next step should be obvious, playing Phantasy Star Online!
I’ve inserted the disc, chose online play, accepted every prompt and waited:

(About a decade ago, on the GameCube, this was the moment when the bug caused loading a pirated game – seems like the GameCube sitting next to my TV is waiting for it too….)

To perform a clean start I used the Dreamcast Internal Flashrom Eraser, the result looks like this: 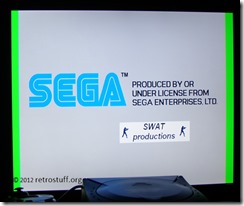 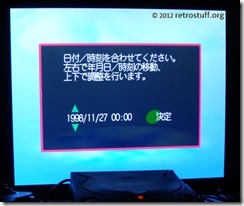