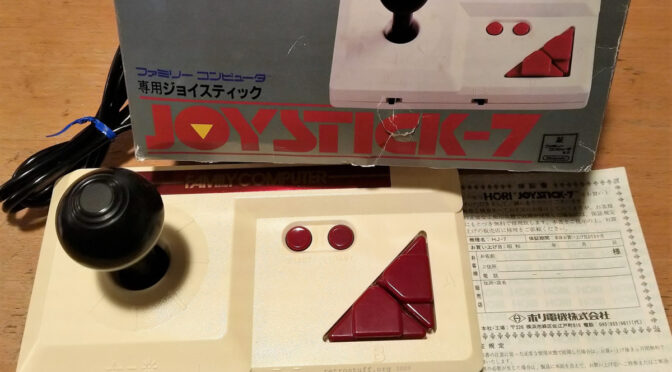 This Hori Joystick-7 (HJ-7) for the Nintendo Famicom has been sitting on my shelf for many years. When I finally took it out to use it for the first time, I noticed that the stick got stuck when moving it all the way to the left or right. In this article, I will open it up and fix that issue.

There are six Phillips screws on the bottom that hold it together. Four of these screws are hidden underneath the feet.

Two Phillips screws hold the PCB to the top of the base.

Here we can see the reason why it gets stuck: Dust and small particles of the top of the base, which were grinded off when I moved the stick.

First, I removed the black plastic cover that holds the rubber pads on the PCB. It was held by two plastic clips and three stripes of film tape that had dried out long ago. I cleaned everything and also checked the condition of the pads. The black pads were stiffer than the grey pads, but still in a good condition. If they ever need replacement, here is an article that shows how to do it.

Next, I cleaned the base of the stick and I applied a small amount of Teflon grease for modelmaking to it. It really doesn’t need much, just apply it to the four junctions of the outer ring and about 5 mm of the base (see the dashed line for where to stop). In this picture I’ve actually used to much and had to wipe it off later.

And finally, I fixed the plastic cover with the pads back to the PCB with new tape. Then, I applied some grease onto the top of the plastic dome.

The joystick works fine again – it doesn’t get stuck anymore and moves back to the center upon release.