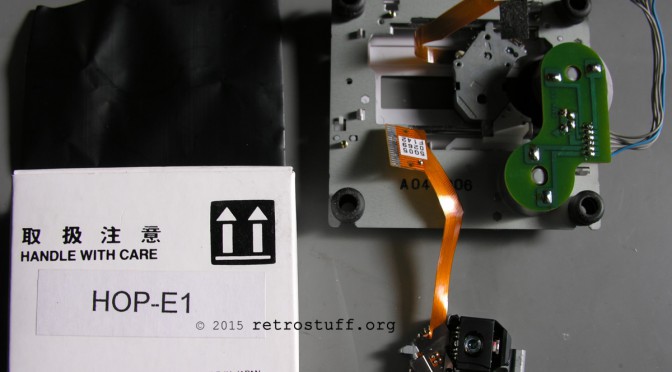 I’ve been struggling with a weak PC-FX laser for quite some time. What kept me from changing the laser or pickup unit was that having to take the PC-FX apart and put it back together later is something you wouldn’t wish your worst enemy. A complete disassembly can be found here. However, getting close to the drive unit is surprisingly easy if you just follow this guide.

First, you need a replacement laser. I chose the complete pickup unit (Hitachi HOP-E1), which was available for about 15€.

Turn the PC-FX upside down and unscrew the four Security Torx screws. Although they seem to be T12 screws, a T10 driver works just fine. 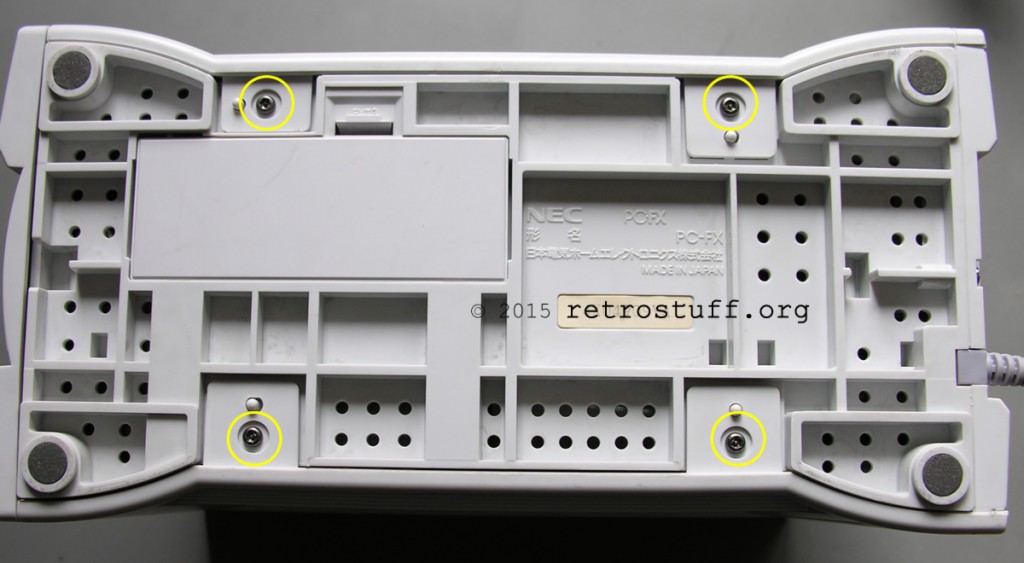 Then remove both side panels and look at the left side. At the top, you see the three connectors for laser, motor and lid sensor. Remove the front panel by carefully bending the three plastic clips at the left side, then turn the PC-FX around and bend the clips on the right side. I’ve marked the three clips for removing the top panel too in this picture. 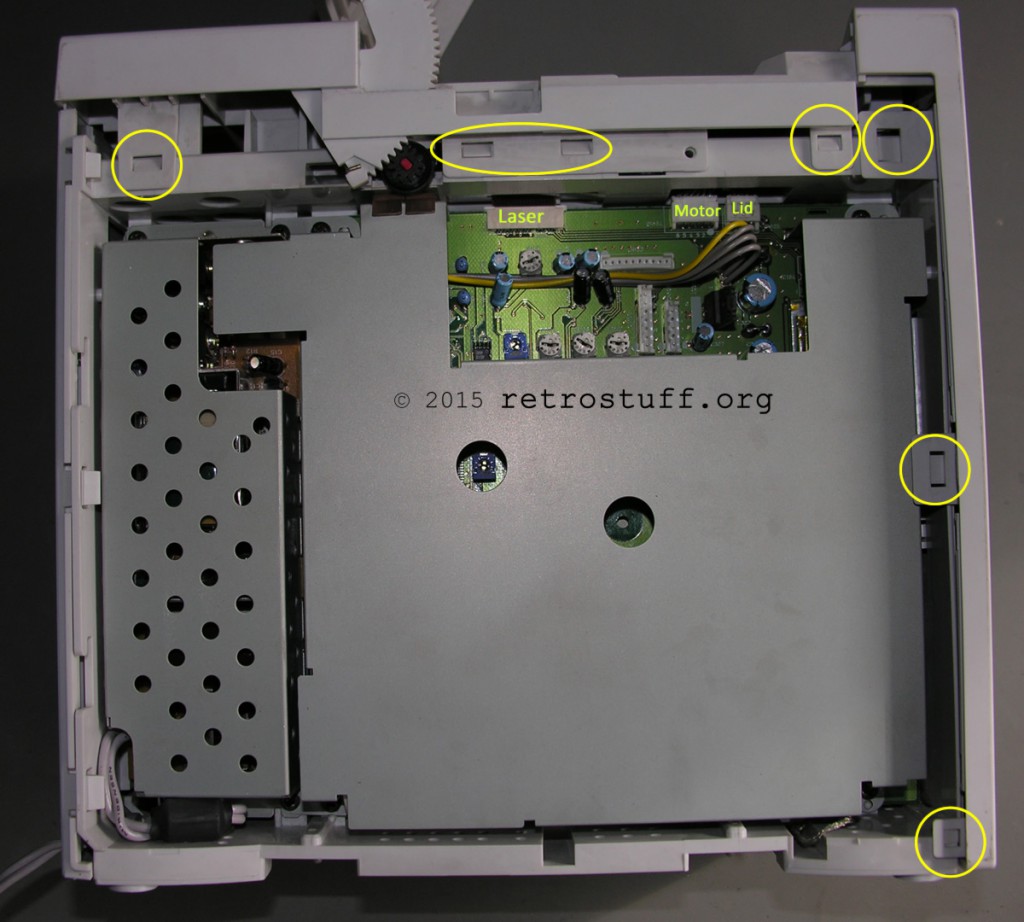 Unscrew the four Phillips screws, unplug the motor cable and carefully lift the CD drive unit. Then unplug the laser pickup cable from the mainboard. 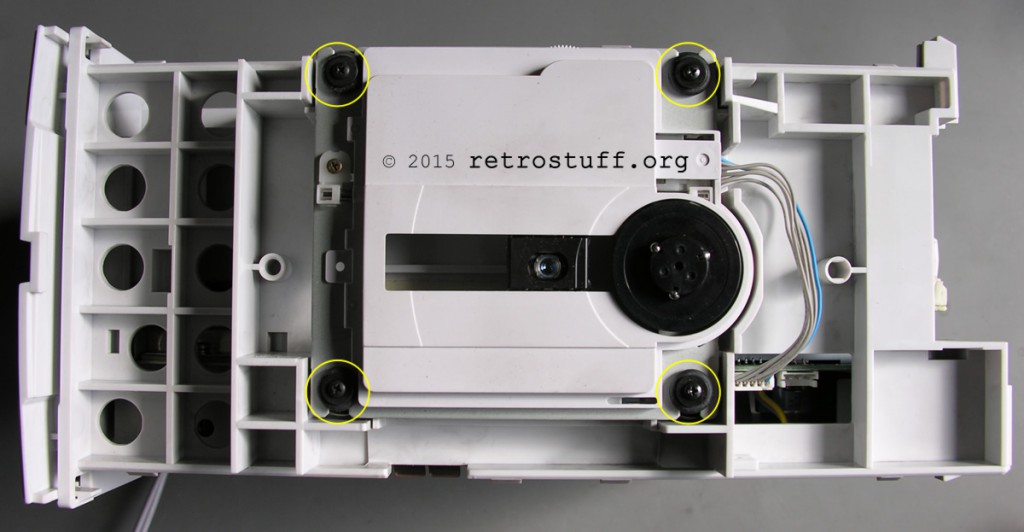 Turn around the CD drive unit and remove the plastic case by bending the four marked clips:

Unscrew both Phillips screws that hold the glide rod of the laser pickup: 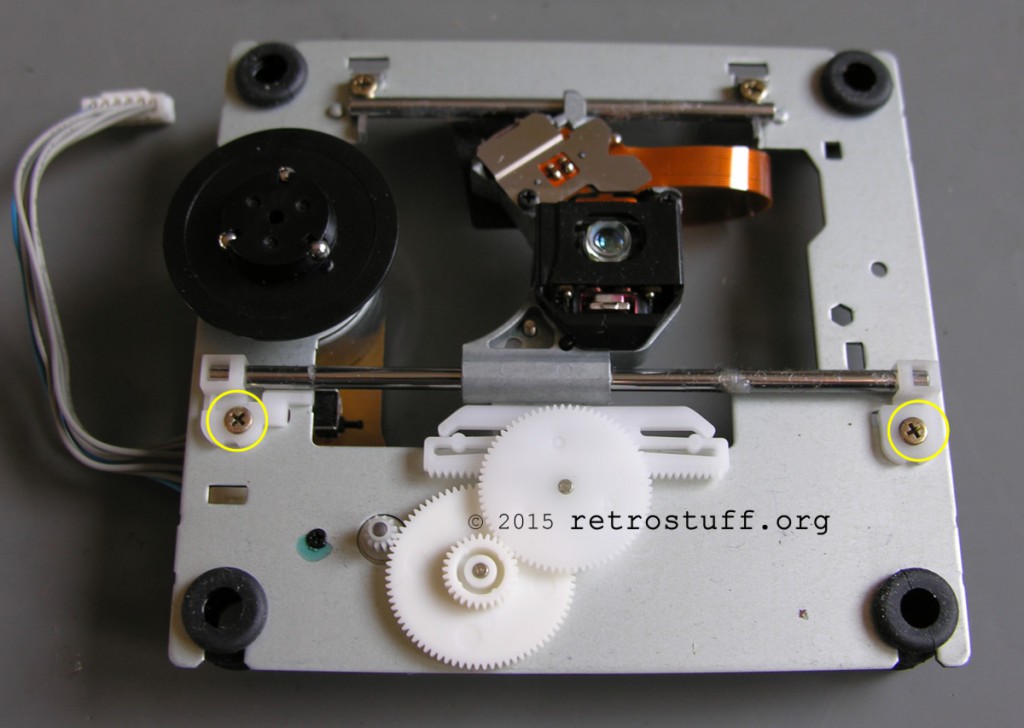 Now is a good time to take a look at the cable of the new pickup. There is a solder blob, virtually a transport lock. If you don’t remove it, the laser won’t work.

Then unscrew the Phillips screw on both pickups and exchange the plastic parts. Insert the glide rod into the new pickup and put everything together. Before assembling the panels, I strongly recommend a function check (this is how I noticed that I forgot to remove the solder blob…). 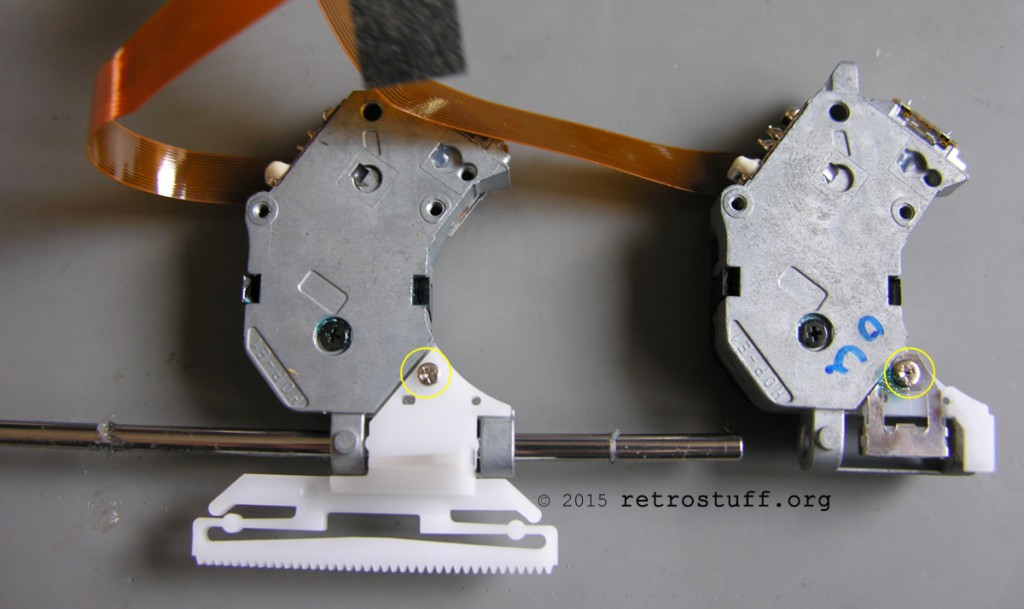 A quick update to answer some of the questions that I’ve received in the last years:

You must not adjust the potentiometers if you don’t know what you are doing – it could make things much worse. If you really need to adjust them, measure between all three terminals and note down the values. Make only very small adjustments and do not adjust more than one potentiometer at a time / before doing some tests first.

This is a quote from a post by user SamIAm of the Pcenginefx forums. Annotations have been added in square brackets. I have not tested it yet.

Open up your system, find the row of three white potentiometers, and turn the middle one [VR103] 1/8 of a full rotation [45°] counterclockwise. Check and see if it works. If it doesn’t, give it another 1/8 turn (you want to do this as few times as possible). If it doesn’t work after it’s been turned 4/8 of a full rotation, it’s probably not going to work, and you’ll need a new laser.

A close-up of the daughterboard of my PC-FX. The metal shield hasn’t been removed yet. The potentiometers (trimmers), relevant ICs and connectors are labelled.

There are at least two more variants of the daughterboard where the labels are upside down or some components are in different places.